Rhett, Lynch, Dickerson, Akins Put On a Concert for the Ages

The PNC Music Pavilion in Charlotte, NC was electric last night as country-music superstar, Thomas Rhett took to the stage as part of a stop on his Very Hot Summer Tour. The first opener of the night was Rhett’s own father and popular 90’s country artist, Rhett Akins. The Pavilion quickly became packed as more attendees filed during Akins’ 20 minute set. After a short 10 minute break, during which top radio hits blasting over the loud-speakers kept the audience amped up, Russell Dickerson kept the show going as the next opening act.

Dickerson, an artist whose name is quickly gaining popularity within country music, kicked off his set with the song “Billions” off of his 2017 debut album, Yours. The crowd went wild as Dickerson showed off his funky dance moves while performing other hits like “Every Little Thing”, “Girls Night Out”, and country music chart-topper, “Blue Tacoma”. After 30 minutes Dickerson wrapped up the set, making way for the next act, Dustin Lynch. 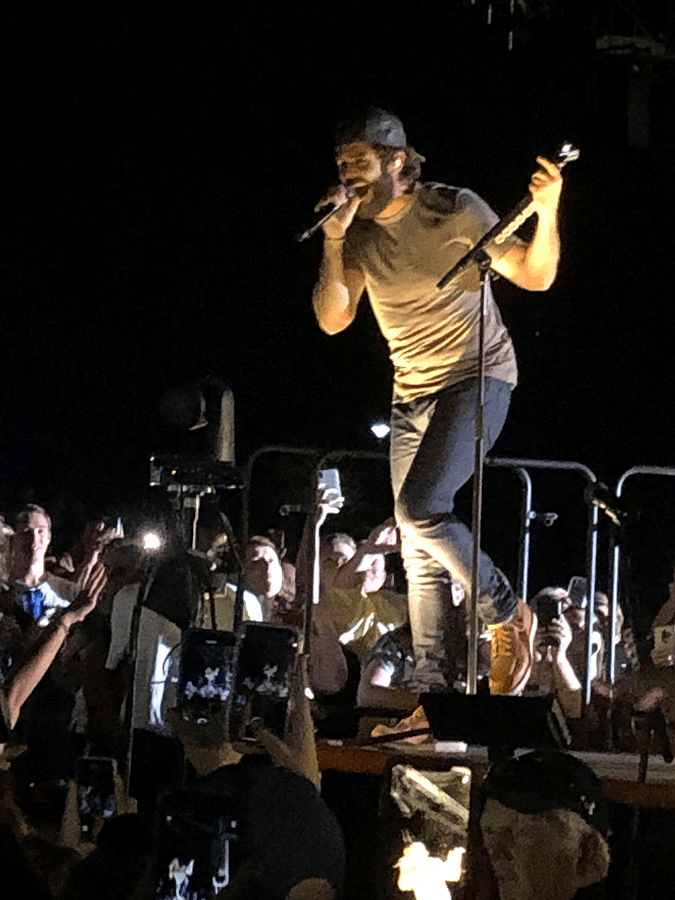 Lynch, who first entered the country music scene in 2011, fired up the audience with his intro song, “Seein’ Red”, the lead single from his third album, Current Mood. A highlight from Lynch’s set was when the artist took the crowd down a trip through country music, memory lane, as he told the story of how he came to perform on the PNC Pavilion stage that night, through musical tributes. He threw it back to classics like “Chattahoochee” by Alan Jackson and “Something Like That” by Tim McGraw, while also tributing to some of his country music idols, like Garth Brooks and Keith Urban. Lynch continued his set with more tributes to modern-day country stars, with songs like “Beautiful Crazy” by Luke Combs, and “Tequila” by Dan and Shay. A noteworthy moment was when Lynch had the crowd cracking up as he began singing Thomas Rhett’s hit, “Die A Happy Man” as part of his tribute series. He quickly laughed off the song, jokingly saying he “won’t butcher that one” and the audience will be much happier hearing Rhett sing it, himself. After a couple more singles from his new 2019 album, Ridin’ Roads, Lynch left the stage and an electrified audience that was eager to keep the party going.

The sun began to set and after a 15 minute stage-prep and much anticipation from the crowd, the headliner, Thomas Rhett finally made his appearance on the PNC Music Pavilion stage. Rhett came out singing the hit single “Look What God Gave Her”, off of his latest studio album, Center Point Road. To say the audience was amplified, would be an understatement. Fans of all ages filled the aisles and open areas across the venue, dancing into the night as Rhett continued the show with his multitude of chart-topping hits. He talked about his musical journey, saying how he had previously performed on the PNC stage multiple times as an opening act and how humbling it was for him to be there last night as the headliner. At one point, Rhett, guarded by security, ran through the crowd to a smaller stage set up in front of the lawn area where he performed a few songs, one being “That Old Truck”, another one off of his new album. Concert goers rushed to the stage, creating a pit right in the middle of PNC Pavilion, surrounding the artist. As the night went on, Rhett stuck mainly to songs off of Center Point Road, while mixing in previous hits like “Craving You” and, “Crash and Burn”. With the crowd charged up, Rhett closed out the night with his platinum chart-topping single, “T-Shirt” from his 2015 album, Tangled Up. To little surprise, Rhett fans were not ready for the night to come to an end as Rhett said his goodbyes and thanked the audience during his exit.

As people began to file out, it can be confidently stated that the house was brought down once again at PNC Music Pavilion with another great show.