Attention Charlotte rock fans! Mark Saturday 9/21 on your calendars. Pam Taylor Presents – Girls Rock the Rabbit Hole will be taking place in Plaza Midwood at The Rabbit Hole. Doors open at 8:00 pm with the show starting at 8:30 pm.

Tickets are just $10 pre-sale, or $15 on the day of the show. Pre-sale tickets can be purchased by visiting the event Facebook page. A portion of proceeds will be donated to Girls Rock Charlotte. 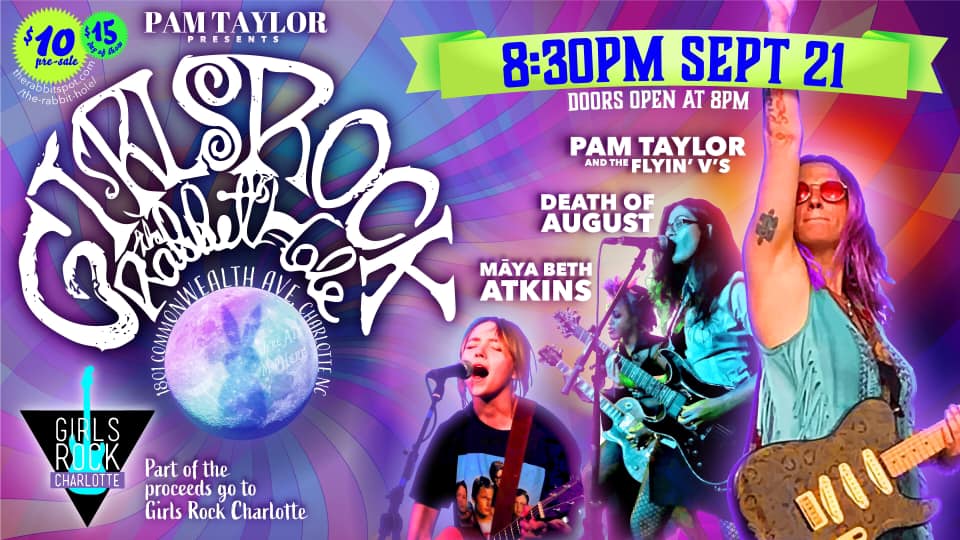 The event will feature some of the top female rockers in the area. Māya Beth Atkins, Death of August, and Pam Taylor & the Flyin’ V’s will all be taking the stage.

Based in Charlotte and Asheville, NC, Māya Beth Atkins is a rock singer-songwriter who performs at venues throughout both cities. Atkin’s debut album, Whatever You Are, was released in 2018 and can be heard on Spotify and other streaming platforms.

Death of August is a heavy metal, hard rock band based in Charlotte, NC. With inspirations from artists like Avenged Sevenfold, Metallica, Black Sabbath and others (per their Facebook page), Death of August can be seen performing around the Queen City. Their single Equinox can be listened to on Spotify.

Pam Taylor is a multi-award-winning artist from South Carolina, having won the Queen City Music Award and Carolina Music Award for Best Female Rock Artist on multiple occasions, among several other awards (per her Facebook page). Pam Taylor & the Flyin’ V’s are a Charlotte-area rock band that performs throughout the Greater Queen City.

All rock fans are encouraged to attend! This is set to be a night of incredible rock music that will last into the night. Save money and purchase your ticket today!