This past Thursday (11/14/19) featured an incredible concert for an amazing cause. 96.9 The Kat, Charlotte’s number one radio station for new country music, presented Kat Jam at Coyote Joe’s benefiting the children at St. Jude Children’s Research Hospital here in Charlotte. The event was truly amazing.

There was a ton of hype built up for Kat Jam, centered around who Paul Schadt’s mystery headliner would be, and we’re here to verify that it did not disappoint. Confirmed artists that we knew would be in attendance leading up to the event included Runaway June, Hunter Phelps, Jameson Rodgers and Jon Langston. But the headliner would not be revealed until he or she took the stage the night of. 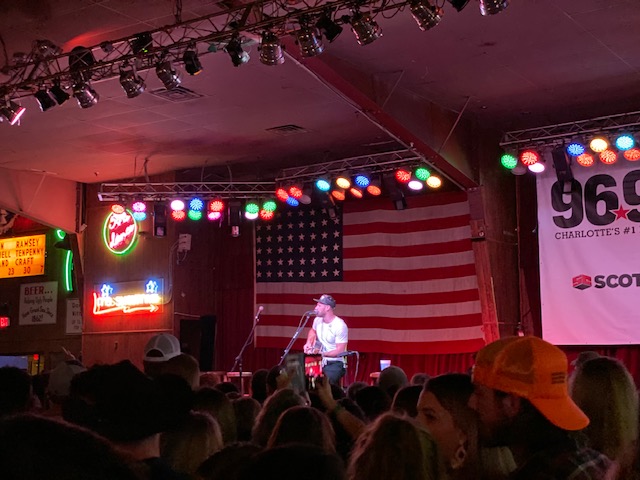 Coyote Joe’s and 96.9 both shared teasers as to who the options were, with the ultimate hint being that the artist had Carolina ties. Speculation began circulating, with popular guesses including Luke Combs, Eric Church, Chase Rice, Darius Rucker and Chris Lane.

The evening started with the four previously confirmed acts taking to the stage at the same time. It’s not often that we get to see so many talented musicians on stage all at once, and they were exceptional. From playing their hit music to interacting with each other on a personal level, it was a truly unique and incredible experience to be a part of. But as the first set came to an end, the anticipation of the audience as to who the headliner was only heightened.

After a fifteen-minute intermission, the moment everyone was waiting for was upon us. Schadt and Sarah Lee came back to the stage to announce that the headliner was… Chase Rice! Rice took the stage to a standing crowd, and the first words that came out of his mouth were comically, “I’m sorry I’m no Luke Combs.” While Combs is certainly taking the country music scene by storm this year, Rice’s stardom is continually rising as well. And man does he put on one hell of a show.

Playing an entirely acoustic set, Rice’s performance was one for the ages. He opened with arguably his most famous song to date, Ready Set Roll, and immediately had everyone singing along. Rice even invited not one, but two members of the audience on stage throughout the night to sing along with him, including one to a cover of Combs’ hit song, Beautiful Crazy. Rice continued to play acoustic versions of all of his hits, such as Eyes On You and Lonely If You Are, before closing out his 50-minute set with a long-time number one country song that he originally wrote for Florida Georgia Line, Cruise.

What’s even more is that the setting of Coyote Joe’s allows for extraordinary fan-artist interactions. An incredible moment of Jon Langston signing an autograph on a fan’s jacket was caught on video and submitted to us. Check it out below – it’s a truly amazing interaction.

Incredible shot of @jonlangston signing a fan’s jacket at KAT Jam at @coyotejoes on Thursday night. Here’s what Jon had to say about the awesome moment: - “It’s awesome to have people interact and connect with songs and when fans want something signed like a piece of clothing to show they are a proud fan is everything. I love to do it and it makes me want to continue to perform and write songs!” - Big shout out and congrats to @ashleybargfrede for the great video, and thank you to @jonlangston for the follow up quote! - #charlottemusic #charlottelivemusic #coyotejoes #countrymusic #charlottenc #charlotteevents #jonlangston #katjam

“It’s awesome to have people interact and connect with songs, and when fans want something signed like a piece of clothing to show they are a proud fan is everything. I love to do it and it makes me want to continue to perform and write songs!”

The night was nothing short of incredible. A huge shout out to Coyote Joe’s and 96.9 The Kat, the amazing artists that took part, and the fans who came out. Everyone in attendance helped to benefit the children at St. Jude Children’s Research Hospital, and we couldn’t be more thankful.