January 17 2020 – The lights dimmed as Citizen Cope took the stage at Neighborhood Theatre – the centerpiece concert venue of NoDa.

When I heard that Citizen Cope was returning to the Queen City, I was so excited to learn that he would be playing at Neighborhood Theatre – the perfect spot for him to perform his unique music and share his universal message of love. This was the third time I had seen him in Charlotte, and I felt lucky to be watching him again in-person.

The first venue I saw him play was McGlohon Theater in the Blumenthal Performing Arts Center of Uptown Charlotte. It was a much more intimate setting – only Cope and his guitar in front of a dark recital hall. No light show or lasers. Just pure technique and easy confidence from the talented guitarist and vocalist. The acoustic melodies and the smoky timbre of his voice saturated the room, bouncing off the stained glass windows of the upper balcony and mesmerizing the listeners with the complex simplicity of his music. 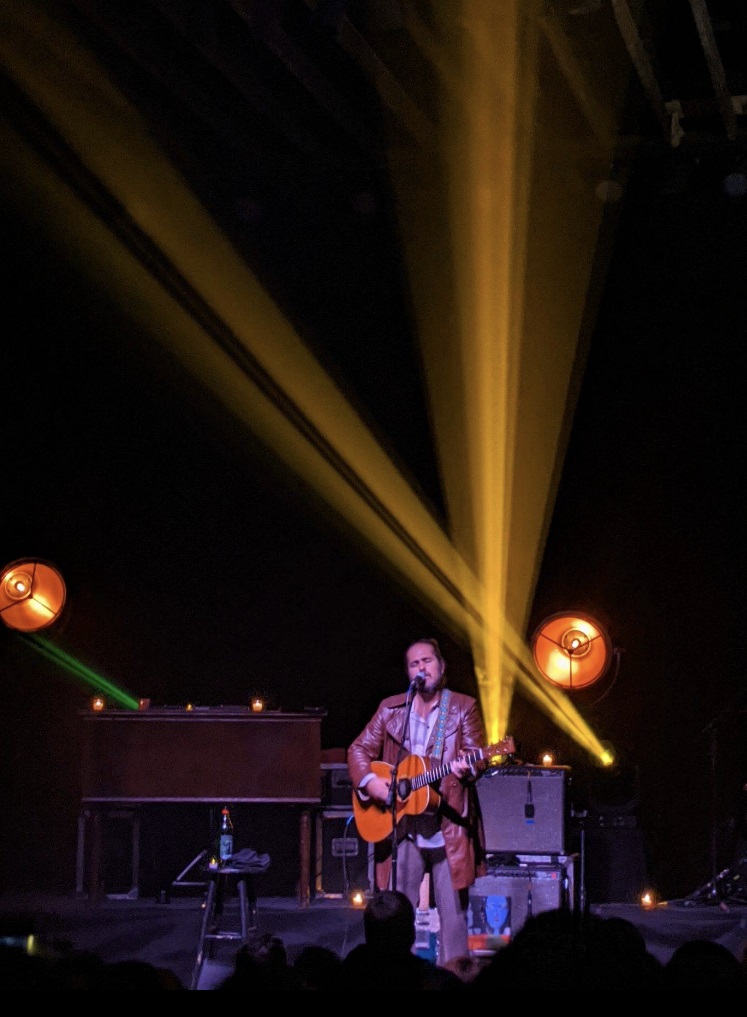 The second time I saw him perform, Cope took the stage with a full band and crushed it at The Fillmore. Even though he played more-or-less all of the same songs as the first concert, this event provided a completely different experience with heavier speakers, sophisticated visuals, and a rowdy crowd.

Now the third time seeing Citizen Cope, I watched him casually step into view, welcomed by the deafening cheers of his faithful audience. After a moment, a hush fell over the room, leaving only the gentle hum of the massive ceiling fan, hanging from the center of the venue’s wood-slatted roof. He captivated us with an acoustic set of some of his slower and softer songs, such as One Lovely Day, Salvation, D’Artagnan’s Theme, and Healing Hands. At the end of this beautiful opening set, he asked for our permission to take a short intermission to give his vocals a break, joking “do you want a short set with no break, or do you want a long set with a little break in between?” The crowd roared their approval, and we all started laughing when he grinned “don’t worry, I’m still going to play all of the songs you came to see.”

When he returned to the stage ten minutes later, he was joined by a drummer and a pianist on either side, taking us into the second half of the show. Neighborhood Theatre doesn’t have a screen for visuals behind their performers, but the lighting perfectly illuminated the dark room with a variety of effects that complemented whichever song was currently being played. With the drums and keyboard accompanying, Cope rocked out with so many of the hits that we know and love, including Let The Drummer Kick, Bullet And A Target, and Son’s Gonna Rise.

After finishing up this second and even longer set, he thanked Charlotte, NC and left the stage. Nobody moved and the room stayed dark – the chants of “Encore! Encore!” echoed off the walls. A minute later, he returned to the thunderous sounds of our excitement, concluding with Sideways and Brother Lee.

Cope had played every song I wanted to hear. He also showcased a bunch of awesome tracks I didn’t know quite as well from his newest album, Heroin and Helicopters, that was released in March 2019.

The only way it could have been a more perfect concert would have been if Carlos Santana himself had joined for the encore performance of Sideways. Santana apparently liked the song so much that he decided to record his unmistakable electric guitar over the original track of Sideways, adding an extra layer of beauty and putting it on his internationally famous album – Shaman (2002). Cope had already been building a following before this, but the endorsement from one of the greatest guitarists of all time certainly helped make him famous all over the map.

Now that I had seen Citizen Cope for the third time, I couldn’t help but think about all the different times and places I’ve listened to his music over the years. I have changed so much, and the music has evolved with me. I know all of his songs so well, but every time I listen, it’s like I’m hearing them again for the first time. Identifying things I hadn’t heard before. Understanding myself a little better by connecting with my past.

Despite the fame and a 30-year career, the artist Citizen Cope has never been changed by the money or the exposure. His message and his music have stayed the same – preaching love and thoughtfully describing life through lyrics.

Real life. Finding a silver lining in the darkness, no matter how faint the light may seem. Simple and complex. Brooding but happy. Forever burdened by the struggles of the world, yet optimistically looking towards a brighter future.

Coping with today, but always hoping for a better tomorrow.