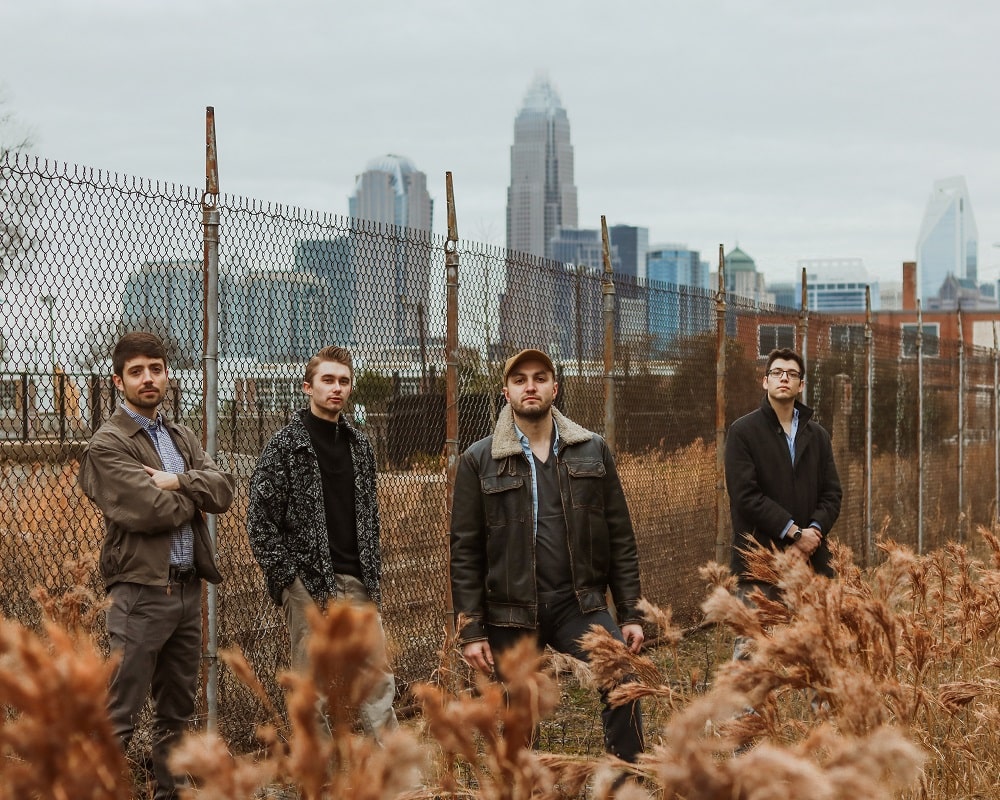 Deaf Andrews is a Charlotte-based rock band that is on a mission to “explore sounds that compel the feet to move, the head to bang, and reward the ears for getting closer to the music.” When you listen to the band’s tasteful blend of indie rock, blues, and funk, you’ll be moving along from the beginning. You know that feeling when you start vibing to a song within the first three seconds of hearing it? That’s exactly what happened to us the first time we heard Deaf Andrews’ song Justified. If you’re even the slightest fan of rock music, give it a listen – along with the band’s four-track EP released last November – on Spotify or Apple Music.

Deaf Andrews is comprised of four friends and talented musicians. The band features Nick Hayes on guitar and vocals, Braedon Nelson on drums and keyboard, Ross Schumann on bass, and Mike Sherrard on lead guitar. We recently had a chance to get to know the entire group a little bit better as they were gracious enough to answer a few of our questions. Discover their story in our interview with them below, and give their music a listen while you quarantine. You won’t regret it.

How did you all get together, and what are key highlights of your journey to this point?

“Nick Hayes (Vocals/Guitar) and Ross Schumann (Bass/Vocals) began playing music together in 2011 while attending high school in Morehead City, NC. Their common love of classic and alternative rock led to countless hours of jamming in the Schumanns’ backyard shed. While they mainly played cover songs for fun, the friends fantasized regularly about starting a band of their own. The name “Deaf Andrews” was conceived during one of those shed jam sessions. Inspired by two friends they knew, both named Andrew, both deaf in one ear; the name stuck with them ever since.

“Fast forward a couple years to college, the boys met Mike Sherrard (Lead Guitar) while attending UNC Charlotte. The three began writing songs together including “Shakey Knees” and “Stubborn Chime”. They played at open mic nights, fraternity events on campus, and anywhere else that would have them. They continued to grow as musicians, all the while searching for the missing piece to their band: a drummer.

“While a few drummers came and went, no one seemed to fit perfectly. It wasn’t until early 2018 when multi-talented musician Braedon Nelson (drums/keys), another Morehead City native, came into the picture. Nick had met Braedon the summer prior while recording an acoustic demo of “Stubborn Chime” in Braedon’s home studio. This time, Nick brought the rest of the guys with him to record “Shakey Knees”. During the session, Braedon showed his potential on the drums laying down a track for the demo. After a few back and forth trips to Charlotte, Braedon decided to move in with guys and join the band. The Deaf Andrews were born.”

Which bands or artists would you compare your music to?

“We like to think our music is a blend of rock, blues, and funk. We’ve been compared to bands such as Red Hot Chili Peppers, Incubus, Radiohead, and Arctic Monkeys. We’re still a young band though, and we are always experimenting with new sounds and genres. It’s more important to us to play whatever sounds good, rather than try to fit into a specific box.”

Do you draw on any musical or artistic inspirations?

“Our inspirations include a variety of artists including Arctic Monkeys, Red Hot Chili Peppers, The Avett Brothers, Kings of Leon, Led Zeppelin, The Eagles, The Beatles, and Fleetwood Mac.”

What is it that makes your music unique?

“What’s really cool about our band and songwriting process is that we each bring something unique to the table. Everyone has their own style and preference, which is why I think it’s so hard to define us as one specific genre. We try to mix elements from all kinds of different genres, to create a sound that all four of us love.”

Do you have any past accolades or recognitions that you would like to highlight?

“Probably our biggest milestone thus far was releasing our debut EP “Tease” on November 15th 2019. We had an awesome release party at the Visulite Theater, where we drew our biggest crowd to date. We received so much support during the process, and it really felt like a giant step for us as a band. We have begun branching out to other cities in North Carolina now, and are very excited about the traction we’re gaining.”

Is there anything else you would like to highlight?

“We are currently working hard on a new batch of songs for 2020. Whether they will be released as an EP or a full length album is still up in the air. Regardless, be on the lookout for fresh new tunes by the end of this year! We also have new colored t shirts available for $20 each. You can DM or email us if you are interested.”