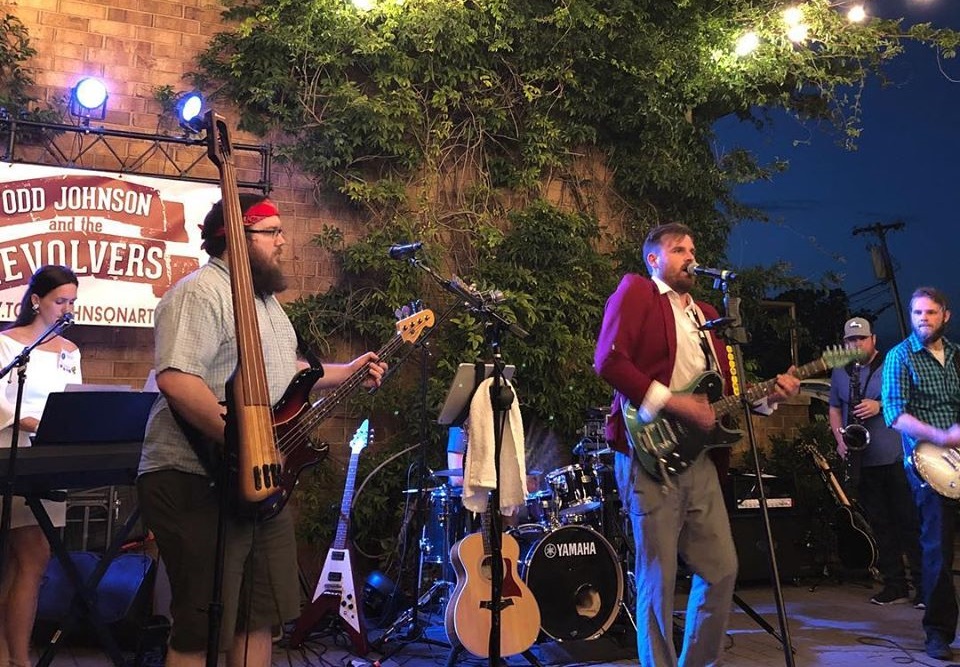 Todd Johnson & The Revolvers (TJ&R) is an awesome local music project, self-described as blending the “swagger and romance of Rod Stewart and the American cool of Springsteen”. In March 2020, they released their first EP called ‘Use Some Company’, and the vocals of the title track ‘Use Some Company’ really do sound exactly like a late 1970’s Rod Stewart song. The genre of TJ&R varies from song to song because they feature a variety of different musicians and styles, but the tracks are connected by the versatile and gritty voice of the band’s leader, Todd Johnson.

Before bringing in The Revolvers (the many talented musicians that help support his vision), Todd Johnson started out like Stevie Wonder and Steve Winwood – playing every instrument, performing vocals, and then blending them together to make music. He began his musical journey at the age of 14 in nearby Asheboro, NC and has been more-or-less living in the studio and on the stage ever since.

The music project has evolved so much over the last decade, and what started out as a solo project has now truly become a team effort that empowers a wide variety of musicians. Here is how Todd Johnson describes The Revolvers: “Over the years, the revolving lineup has solidified to feature several usual suspects including Joe Riddle, Luke Jones, Jason Atkins, Jay Conner (Scott Moss and the Hundred Dollar Handshakes), Tyler Menon (of Stellar Circuits), Fred Dunlap (Late Night Special, Falconheart), and Gillian Zambor (of Gillian Zambor, Late Night Special), but, as always, the list of Revolvers continues to grow.”

Amidst the current pandemic, many of the Revolvers created a wonderful quarantine music video for Use Some Company to help us all smile during this crazy time. Check it out below, and keep an eye out for a few past CCG Featured Artists 🙂

Because of the flexibility of the music project, Todd Johnson & The Revolvers can get a full 8-piece band in front of a packed house at a larger venue, or they can perform at smaller settings to provide a more intimate experience. You may have joined them at Rooftop 210 in the Epicentre for their Mardi Gras concert, or you might have seen them provide a more personal and acoustic touch at the Evening Muse in NODA. Once things start getting a bit more back to normal, we’re sure that they will be making many more appearances in the Queen City.

At Charlotte Concert Guide, we are thrilled to promote Todd Johnson & The Revolvers as our Featured Artist this week, and we know our followers are excited to see them take the stage again in Charlotte, NC. In the meantime, check them out on Spotify, like them on Facebook and follow them on Instagram to stay updated on all their latest music.